Jessica is a 32-year-old nurse, who presents to her primary care provider complaining of frequent headaches, irritable bowel, insomnia, and depressed mood.  She takes no medication and has never abused substances.  Her only mental health issue has been a single depressive episode when she was a college freshman, which was alleviated by going to therapy. She has no underlying medical illness.  Her family history is notable for several ancestors who have been affected by psychiatric illness, including depression, bipolar disorder, and schizophrenia.  Jessica has had 3 prior episodes of several weeks’ duration characterized by erratic behavior at work, irritability, excessive energy, and decreased sleep. She finds herself regretting impulsive financial decisions that she took during these episodes, and has recently filed for personal bankruptcy. For the past month, Jessica’s mood has been persistently low, and she has had reductions in sleep, appetite, energy, and concentration, with some passive thoughts of suicide. 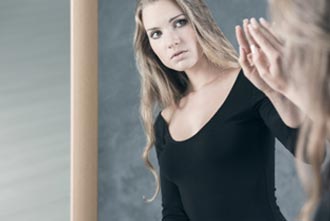 Common Symptoms for a Manic Episode:

Common Symptoms for a Depressive Episode:

Diagnosis for bipolar disorder is often tricky, because the symptoms that manifest themselves can also be symptoms of other disorders, such as depression, anxiety, substance abuse disorder or schizophrenia.  With the help of a trained professional, however, these disorders can be distinguished, and a proper treatment plan can be developed.