What are Eating Disorders?

Eating disorders affect approximately 6 million individuals in America. Unlike dieting, eating disorders are strongly associated with unusual eating behaviors to prevent weight gain. It is also characterized by never being satisfied with the weight loss, even if the individual loses a large amount of weight, even to an unhealthy point. Eating disorders primarily affect younger women, but they have been known to exist in other groups such as men, older women, minorities, and people of different income levels. Eating disorders are psychological disorders brought about by unresolved problems and/or traumatic events in life.  The disorder involves development and habitual maintenance of the unhealthy eating habit.  In addition to keeping the eating habit, body image over-concern and/or distortion is at the core of eating disorders.

Individuals suffering from Anorexia Nervosa are dangerously thin, but continue to use starvation to lose weight.  Individuals suffering from this type of eating disorder present with a real fear of weight gain and a distorted view of their body size and shape which causes restriction of food, extreme dieting, and/or excessive exercise. They will continue to restrict the amount of food until they eat hardly anything, or restrict the amount of food they eat and engage in behaviors that further prevent weight gain, such as vomiting, abusing laxatives, or misusing enemas.  People suffering from Anorexia Nervosa also weigh approximately 85% less than an individual of normal weight size for that age group, and it is common for women to stop having a menstrual cycle.

Individuals suffering from Bulimia Nervosa eat food in large amounts and then engage in inappropriate behaviors to lose weight. These individuals may eat large amounts of food in a short amount of time, then use inappropriate behaviors to eliminate the foods they have eaten, such as vomiting, abusing laxatives, or misusing enemas.  They may continue to eat large amounts of food, but do not try to excrete the foods from their bodies.  Instead, they may use other inappropriate behaviors such as excessive exercise. This cycle occurs at least twice a week over months.  People with Bulimia Nervosa often maintain a normal body weight for their size despite the large amount of food they eat.  Some common signs of bulimia include the following: hiding food, scars caused by teeth marks on the top surface of the hand, tooth decay, swollen glands, and possible ulcers.

The root cause of eating disorders is still currently unknown.  Scientists speculate that it is a combination of genetics and environmental influences playing a part. Regardless of the cause, eating disorder illnesses can be extremely deadly if not treated properly. Some effective forms of treatment are CognitiveBehavioral Therapy and Cognitive Therapy, amongst other models of therapy. Unhealthy eating patterns become harder to break the longer they continue.  Of the 10% of American females with an eating disorder, it is estimated that more than 50% will die from their disease.  Depending on the severity of the disorder, individuals may be referred to either an inpatient or outpatient treatment facility.  For outpatient treatment, Genesis Counseling Center can offer these effective forms of treatments as well as nutritional information to help recover from the disorder. Genesis can also help you locate an inpatient facility for treatment to meet you or your loved ones needs.

“In America, 1 or 2 out of every 100 students will struggle with an eating disorder.” TeensHealth.org

Have you ever stood alone in the kitchen, mindlessly gorging yourself with whatever you can find in the cabinets and fridge? Or maybe you hit the drive-through at a local fast food chain and order enough for two people, then eat it in your car where no one you know can see you? Do you feel out-of-control sometimes with food? Have you experienced the guilt, shame, and regret that often follow? If you find yourself doing these or other similar things in your relationship with food, you may have Binge Eating Disorder (BED).

A person typically meets the criteria for Binge Eating Disorder when they are repeating the type of behaviors mentioned above at least one time per week. The danger of BED can include weight gain, gastro-intestinal issues, and loss of physical cues indicating fullness. Psychologically, BED can lead to depression and anxiety as a person unsuccessfully attempts to control their behavior with food, or believes food will help improve their pre-existing low mood state. Self-esteem often is decreased and issues can develop with body image.

Learning what factors may predispose you to BED and addressing underlying psychological issues, as well as learning to avoid triggers, is often very successful in helping individuals in their recovery from BED. Counseling can be a very effective resource for treating and overcoming BED. Genesis Counseling Center has several counselors who are able and eager to help. 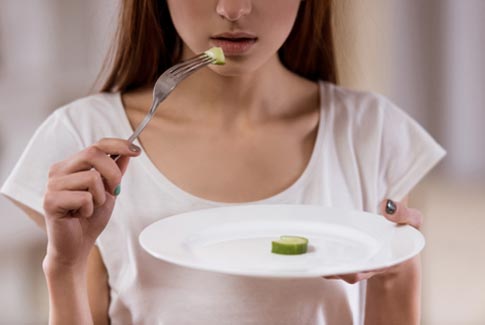